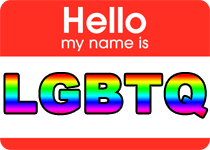 Are you starting a new gay/straight alliance or queer student group at your school?  Are you looking for a new, inclusive, catchy name for your student organization?  A name can be an important indicator of what type of group it is, the message group members wish to convey, and who will be interested in your organization.

Naming your group can be both fun and challenging. At some colleges and universities, there are few restrictions on what a student group is called.  On some campuses, though, certain names/words/phrases are not encouraged, or even not allowed.

Gonzaga University is a small, Catholic school in Spokane, WA. One student told us that when their student organization was forming, they were not allowed to use the words “gay” or “homosexual”. In fact, “the Trustees of the University would have been shocked to learn that gay students actually existed at Gonzaga”.  Students chose the name H.E.R.O. (Helping to Educate Regarding Orientation). Gonzaga has become less conservative since the group was formed, but students are reluctant to change the name of HERO because people know what the group stands for. They also like the fact that “education” is in the title.  Now, when they advertise, they proudly display “HERO: Gonzaga’s Gay-Straight Alliance.”

Bringing pride to a campus LGBTQ community is one of the common denominators in our student organizations, and also a common choice for a student group name.  The Keeweenaw Pride group at Michigan Technological University (named for the Michigan peninsula on which the school is located) and Pace University – Westchester’s Pride Coalition are two such examples.  In the same vein, the student organization at DePauw University uses the name United DePauw.  The lambda symbol, adopted by the LGBTQ community as a symbol of pride, is also featured in the names of many groups.  Nic, president of the Lambda Student Union at the University of Tennessee – Knoxville, says the lambda symbol represents the “community as a sign of equality and human rights.”

Many campuses feature student “alliances”.  At the University of Southern Maine, the student organization is the Alliance for Sexuality and Gender Diversity.  Some schools have Gay-Straight Alliances, Pride Alliances and Rainbow Alliances.  The University of Maine at Farmington has a group called the Rainbow Education Alliance of Diverse Individuals, or READI.

Many groups use acronyms to represent who they are and what they do. Montclair State University in New Jersey is home to SPECTRUMS,  for Sexuality, Pride, Education, Truth, Respect and Unity at Montclair State.  Melynda Davis, Coordinator of Residence Education at Roger Williams University, wrote to share information about the SAFE student group she works with.  SAFE stands for Sexuality Advocacy for Everyone, though students are considering changing the name to Sexuality Alliance for everyone, as all people are born with a sexuality in one form or another.

Paul, vice president of the Southwest Minnesota State University group OQS (Out, Questioning, Straight), explains that they “chose the acronym instead of a more traditional name, making the effort to appeal to everyone and anyone on campus who wants to be, or feel they already are, an ally of the LGBTQ community.  One more example is SAGE (Straights and Gays for Equality), the student group at the University of Wisconsin – La Crosse.

Queer is both a catchall term and one that is fraught with controversy on some campuses.  Many activists and student leaders use ‘queer’ to represent our entire community.  However, some people don’t feel as comfortable with its visibility or history as a slur.  The folks at Williams College settled on Queer Student Union after they went through many previous names.  Stephen Collingsworth, Queer Issues Coordinator at Williams, says, “we figure anyone who calls into question gender norms and norms surrounding issues of sexuality in general can be called queer.”

Queers and Allies (Q&A) is the name of the group at the University of Missouri – Kansas City.  Chad tells us they chose the name for two reasons.  The first is to represent group membership, and secondly, they like the Q&A aspect of the name.  They put an emphasis on asking questions and answering them, not only of group members, but also of the larger university.  The University of California at Santa Barbara also uses the word “queer” in its various group names, including Q Grad, for graduate students, QPOC (Queer People of Color).  Kyle from UCSB says that queer was chosen for its inclusiveness. However, he also reports that some students do not feel comfortable with the label.

Anne Phibbs is Director of LGBT Student Services at Metropolitan State University, home of the Lavender Bridge student group. Phibbs says the concept of the bridge in the group’s name makes it feel “accessible and open, which is what the group strives for.”  Amanda from MacMurray College in Illinois shared that their student group, Solace: Gays, Lesbians, Bisexuals and Allies for Diversity, uses the name to convey a safe, calming space.  Solace provides “a space to be yourself, whoever that may be.”

And how do groups come up with their names?  Here is one suggestion that allows for lots of input, and some visibility on campus:  Bryan Helminiak, currently a Resident Director at Ohio University, was an undergrad at Michigan Technological University when students chose the name Keeweenaw Pride.  They held a campus-wide naming contest and students were able to choose the name they liked best or suggest different names.  Bryan says that the “naming contest idea was very positive and, if they are a group that can laugh at some of the more interesting names, I highly recommend it!”

What’s in a name?  It’s your decision.