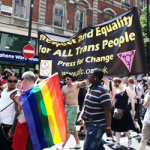 The variations in community experiences between different locations is fascinating to me. In Tampa, Florida, I am heavily involved in the transgender community, and I know many different stories of trans people. While the stories of the two trans people who came and spoke to us while we visited Charlotte are much different, the themes are common in trans narratives.

I think that many people want to learn how to be allied with and an advocate for the transgender community, but not many know how to do this. Keep in mind that all people are different, and this list is just from my experience as a trans person and my speaking with others about their experiences. There may be some transgender people who feel differently about specific things, and that’s okay too.

Here are 16 ways to be a transgender ally and advocate:

There are many more ways to be allied with and an advocate for the transgender community, this is just a few. Through meeting people and talking about issues, you will learn even more ways to be the best ally ever!

Prin is a Sophomore in Women’s and Gender Studies at the University of South Florida in Tampa. Prin prefers they/them/their pronouns and is interning to create an LGBTQ+ LLC on campus called Spectrum LLC. They are apart of University of South Florida LGBT Bulls Service breaks, a program that promotes social justice issues all throughout the country.