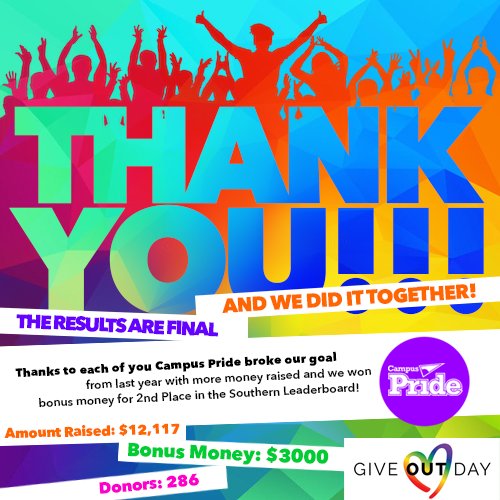 Campus Pride broke our goal from last year with 286 donors and raising $12,117. Plus we won $3000 in Bonus Money by placing 2nd among LGBTQ nonprofits in the South on the Southern Leaderboard!

Grand Total for Give Out Day

In giving to Campus Pride, you are supporting LGBTQ leaders of tomorrow.

Every dollar helps youth leaders who are on the front lines doing the hard work in often difficult, conservative places.

… provide direct service to 600+ colleges through the Campus Pride Index, the only tool of its kind, to increase safety and implement LGBTQ-inclusive policies, programs and practices

… release the most comprehensive listing of the Top 50 LGBTQ-friendly colleges, yielding over 80,000 referrals annually to help prospective students and families