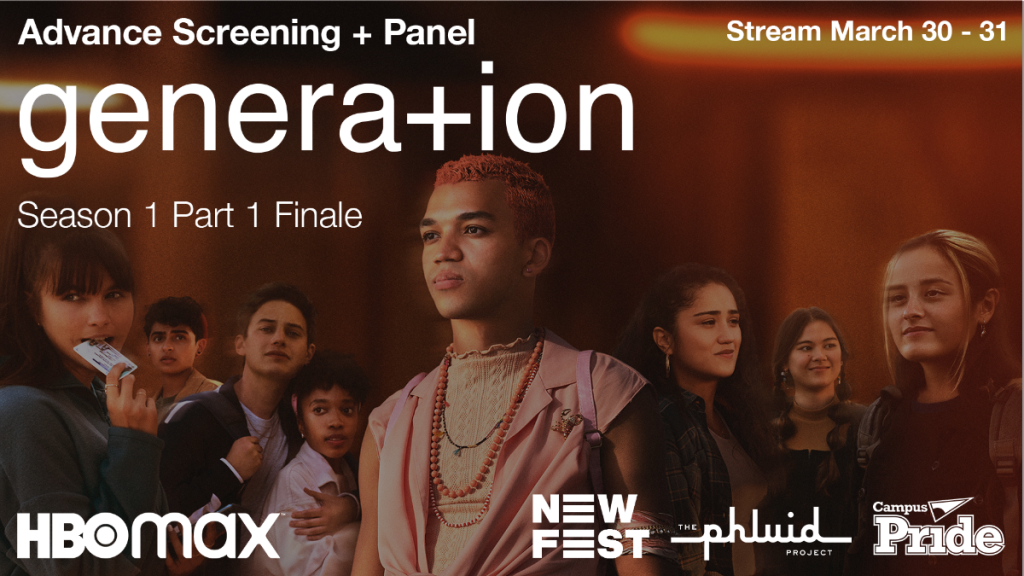 Now in its 20th year, Campus Pride utilizes its resources and expertise to expand the discussions surrounding some of the themes depicted in “Genera+ion,” with the creation of the Campus Pride Ultimate Queer College Guide. This education guide gives students, prospective students, and their families resources to help find the LGBTQIA+ friendly college that’s right for them, best practices for applying to the schools of their choice, and tips on how to be an ally for queer people of color.

“Campus Pride is excited at this unique opportunity to join and enhance the conversation that is being started with ‘Genera+ion,” said Shane Windmeyer, Executive Director of Campus Pride. “Representation of LGBTQ people in the media has changed so much in just a few short years, and it is encouraging to see creators from HBO Max wanting to use their microphone to educate and inform, not just entertain, audiences.”

SPECIAL ADVANCE SCREENING – RSVP NOW: Campus Pride will team up with NewFest and The Phluid Project on a special advance screening of the final episode of “Genera+ion” season 1a on March 30-31, giving LGBTQ+ campus communities across the country a chance to be the first to screen the highly anticipated episode. RSVP to attend this exclusive advance screening and a panel discussion with “Genera+ion” creators and cast. Registrants will receive access to watch starting March 30 at midnight ET through March 31.

Additionally, Campus Pride is proud to launch a new program offering student activists Social Justice Mini Grants to aid their work in making their campuses safer and more welcoming for LGBTQ students, faculty, and staff. Campus Pride thanks HBO Max for their generous donation to fund the first round of these Social Justice Mini Grants. Applications are now open. Apply Now.

ABOUT HBO MAX ORIGINAL “GENERA+ION”
GENERA+ION is a dark yet playful half-hour series following a diverse group of high school students whose exploration of modern sexuality (devices and all) tests deeply entrenched beliefs about life, love and the nature of family in their conservative community.