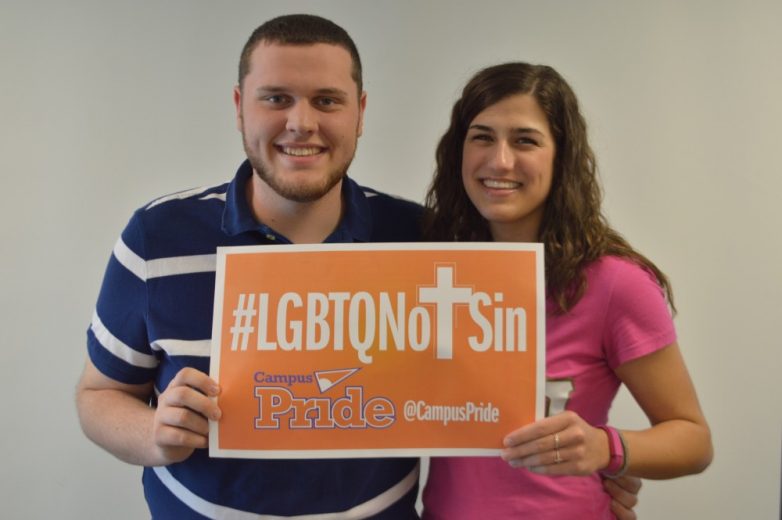 More than ever there is a need to talk about how Christianity is not anti-LGBTQ and neither is the Bible.  The so-called Religious Freedom Bills creeping up state by state only further foster fear, discrimination and divide Christians and our communities of faith.  There are individuals who are both LGBTQ and people of faith.

There are non-LGBTQ people who are Christians who support fully LGBTQ civil rights and freedoms.  These individuals also support religious freedom and are deeply concerned how the Christian faith, and particularly the Bible, has been hijacked to be viewed as anti-LGBTQ in its teachings.

Campus Pride is partnering with Faith In America to launch a youth-driven national social media campaign titled #LGBTQNotSin.  The partnership aim is to remove the stigma of lesbian, gay, bisexual, transgender people being considered a sin within the Christian faith as well as bring visibility to LGBTQ-affirming Christians.

Featured videos and a #LGBTQNotSin social media image are available along with resources from Faith in America online at Campuspride.org/LGBTQNotSin.

Individuals from around the country can create videos sharing personal experiences growing up in Evangelical families/churches and most importantly to address Biblical scripture examining how being LGBTQ is NOT a sin.

It’s simple to create a video:

Christians have misread the Bible before and hurt people. It’s happening again to me. Please stop hurting me with your interpretation of the Bible.

Difference has often been understood by dominant groups as being worth less or even worth less. This happened to women until recently. It still happens every day to gay people.

Three hundred Bible verses seem to accept slavery and even tell slaves to obey their masters. It took a civil war for some Christians to read those verses in a way that rejected modern day slavery, which was so brutal and oppressive.  Six verses seem to condemn LGBT people, leading also to their oppression and suffering. We need to learn from earlier lessons and stop hurting LGBT people by bashing them with those 6 verses.

TELL US: Please email Campus Pride Programs Manager Rebby Kern at rebby@campuspride.org with your YouTube links after completing your videos.

“Creation is not black and white, it is amazingly diverse, like a rainbow, including sexualities and a variety of non-heterosexual expressions of behaviour, affection and partnering occurring in most species, including humans.”–Anthony Venn-Brown

Faith In America educates the public about the harm caused to gay Americans and works to eliminate the oppression and resulting harm of religion-based bigotry. Learn more online at FaithinAmerica.org