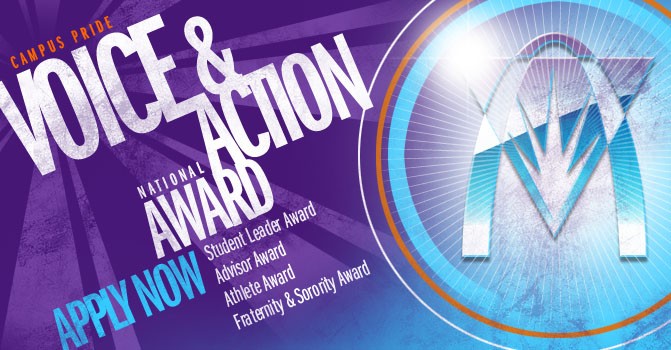 The Voice & Action National Leadership Award program embodies our mission, values and vision for inclusion and recognition of young adult leaders. The annual awards are an honorary national recognition program highlighting the outstanding accomplishments of LGBT and ally young adult leaders and those who work to support LGBT issues at colleges and universities across the United States. The recognition program is the only honor of its kind, focused on the work of undergraduate college students who are creating positive change for LGBT and ally issues within their campus communities, local communities and region of the country.

Applications are due by Friday December 5, 2014. Email all materials to katie@campuspride.org.

Please note that the Advisor Award is a separate application from the Student, Athlete and Sorority/Fraternity Awards.

The Voice & Action Athlete Award is presented to undergraduate student athletes from colleges and universities across the country. This award recognizes the contributions of young adult leaders and the indelible impact that their efforts have on the present and future of our fight for greater acceptance in sports. This award is in partnership with GO! Athletes and the StandUp Foundation.

The Voice & Action Fraternity/Sorority Award is presented to undergraduate students from colleges and universities across the country. This award recognizes the contributions of young adult leaders and the indelible impact that their efforts have on the present and future of LGBT acceptance and inclusion within fraternity and sorority life. This award is given at Campus Pride’s Out & Greek National LGBT & Ally Fraternity & Sorority Conference in partnership with the Association of Fraternal Leadership Values (AFLV).

The Voice and Action National Advisor Award is presented to professionals who work with undergraduate students from colleges and universities as well as communities across the country. Campus Pride recognizes the outstanding contributions of theses dedicated professionals and the indelible impact that their efforts have on student leaders in the LGBT and ally movement for equality.  The annual award is presented in partnership with ACPA – College Student Educators International.