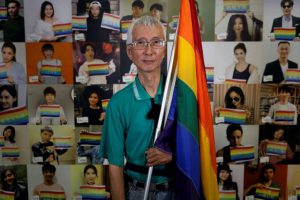 Chi Chia-wei was the first person to come out publicly as gay on national television in 1986, with his own way of attracting reporters from many overseas news outlet through spreading news notifications in the mailbox of Taiwan’s Central News Agency. Despite holding the crammed conference in Mc Donalds, his voice has helped Taiwan become the first country to legalize gay marriage in Asia.

This was not the first time when Chi Chia-wei stood out from other LGBTQ+ organizations as a sole-worker since the 1980s. Raising funds on the streets for AIDS victims in Taiwan was what he did for years by hanging a donation box from his neck, and dressed up as cartoon figures, mummies, and once in an outfit made of condoms. He was portrayed negatively by the media because of his assumably “weirdness”, which was not only viewed by people outside of the LGBTQ+ community but also by other members of Taiwan’s LGBTQ+ community.  Before working as an LGBTQ+ consultation hotline operator, he used to use his own personal number for consultation purposes and quietly fought against unconstitutional actions in court. Chi is indeed, the very embodiment of Taiwan’s LGBTQ+ history. Known for his appearance wrapped in rainbow flag, Chi has been an advocate for same-sex marriage for over 30 years in Taiwan. After being allegedly accused of robbery which sent him to jail for five months in 1986, he still stood up straight to fight for equality despite the opposition’s fierce reactions. His latest petition resulted in the 2017 ruling with two-thirds of voters voted for the marriage norm of a man and a woman. Conservative groups’ efforts were nothing compared to Chi’s burning desire for equality. In October 2016, Chi won the first “Queer Pioneer Award,” by Taiwanese organization Queermosa. 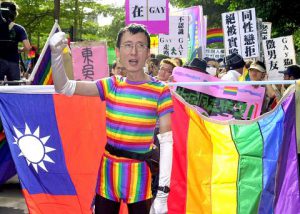 On Friday, May 24th 2019, Chi witnessed the marriage registration for dozens of same-sex couples, the first among those who wed under the new law. “This is never about me or my partner. I did it because I knew many other same-sex couples who needed the legal protections,” he said. “Life goes on for me.”