Now that you’ve signed up to become part, decide if your ally program is going to be a membership 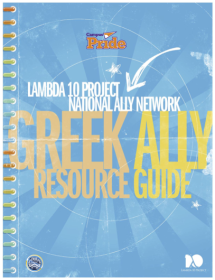 organization or a program of the sponsoring office, or a blend. Another option is to be a Greek division of a campus Safe Zones ally program.

Regardless of which office or department sponsors the program, it will be important to build relationships with other offices for training, promotion, etc.

After you determine your structure you will need to recruit students to be allies.

• Gender parity – experience indicates that it will be more difficult to recruit men, so it is important to make extra effort to ensure that the founding members include a good mix of men and women

• Majority non-LGBTQ (otherwise it will be perceived as an LGBTQ organization, not an ally group)
– but it is also important to have strong LGBTQ participation

• Representation from a variety of chapters from all Greek councils

• Presentations at chapter meetings – go around to all chapters to explain the program.
Include some high profile Greek students in making the presentations.

• Incentives – If you have a campus Greek Standards of Excellence or similar accreditation and/or recognition program, see if you can get points assigned for participation in the Greek Ally program. If your program has a peer educator component, you might be able to arrange for academic credit for peer educators.

• Members who were involved in high school Gay Straight Alliances

• Members with LGBT family members or close friends – when making presentations to chapters, ask members to raise their hand if this applies to them

• References from LGBT Greeks – when you meet individually with Greek leaders, ask them for the names of students they think make good allies

• References from sorority women – as mentioned, it may be more difficult initially to recruit men, so ask your sorority members to invite their fraternity friends

• Give away T-Shirts or Polo Shirts

• Have a Poster Campaign on Campus

• Make Brochures and Handouts to give out

• Go to the meetings of your Greek Chapters

If you want more examples take a look at our sample training, commitment form, & other resources on this page.