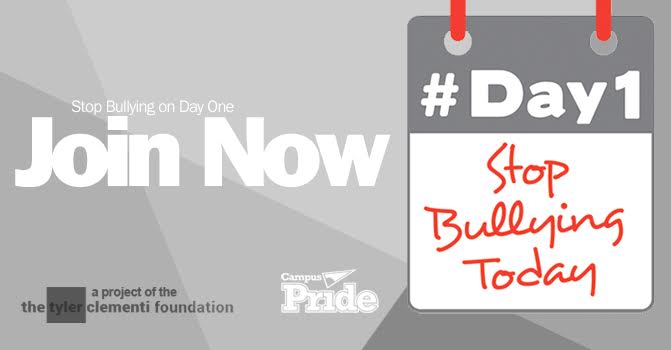 Campus Pride, the leading national nonprofit advocating for LGBTQ students on college and university campuses, has partnered with the Tyler Clementi Foundation on the #Day1 Campaign, a national campaign to reduce bullying by asking teachers, bosses and other group leaders to take a stand against bullying on the first day of a group’s meeting. The Tyler Clementi Foundation’s mission is to advocate for safe, inclusive and respectful social environments for vulnerable youth, LGBT youth and their allies.

The Day 1 Campaign was created by Tyler Clementi Foundation. The foundation was formed in 2010 after Tyler Clementi, a student at Rutgers University, died by suicide after being bullied by his peers. This campaign addresses the fact that more than 3.2 million students are bullied every year, and educational institutions need to begin addressing these realities and working to prevent bullying on their campuses on day one.

WHAT YOUR CAMPUS CAN DO?

Campus Pride will be organizing college and university campus engagement for the #Day1 Campaign, with outreach projects including featured programming at the Campus Pride Summer Leadership Academy and two free national webinars hosted in partnership with Kognito Interactive.

College and university campuses can stand up against bullying and harassment by engaging with the Day 1 Campaign using the following four strategies:

To learn more about the #Day1 Campaign and how college and university campuses can take a stand against bullying, call Campus Pride at (704) 277-6710 or email Campus Pride at info@campuspride.org.

If you would like to receive examples of statements, social media posts or to receive the #Day1 Pledge, fill out the following form: