Campus Pride in Faith (CPF) is a national coalition that aims to provide resources, support, and guidance to lesbian, gay, bisexual, transgender, queer, and ally (LGBTQA) students who seek to build welcoming environments, LGBTQA student organizations, and/or all inclusive non-discrimination policies at their faith-based colleges or universities. CPF affirms that many LGBTQA students are persons of faith, and that all people are entitled to the dignity and respect that is God-given. CPF embraces faith, gender identity, and sexuality where they holistically intersect.

What is Campus Pride in Faith? 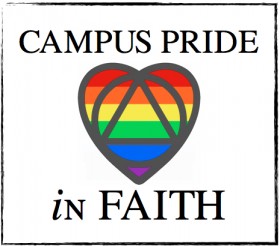 Campus Pride in Faith is currently developing an advisory board composed of professors, administrators, business professionals, laity, religious leaders, parents, alumni, etc. who likewise understand the importance of providing resources and guidance to students on religiously affiliated university and college campuses. The advisory board will be a cornerstone in fostering a national network, developing guidance and resources for university and college administrators, paving the way towards a national convention, and offering direction to the student leaders of CPF.

Campus Pride in Faith coalition works to lead efforts nationally and on individual campuses against a lack of equity, affirmation, and safety on religious affiliated campuses. Campus Pride in Faith offers our community––the LGBTQA community––an opportunity to say that faith, sexuality, and gender identity are not mutually exclusive.

If you are a student leader on a religious affiliated campus, please consider joining the Campus Pride in Faith private community group for networking and resource sharing. Email info@campuspride.org.

Soulforce: Soulforce is a national non-profit that works nonviolently to end the religious and political oppression of LGBTQ people. While Soulforce is not itself a faith-based organization, its organizers lead from the understanding that oppressive religious beliefs, civil rights abuses and anti-feminist attitudes that oppress LGBTQ people are interrelated and part of the cycle of oppression.

HRC’s Religion and Faith Program: HRC’s Religion and Faith Program seeks to engage all faith traditions in a deeper dialogue on questions of fairness and equality for LGBT Americans. Through initiatives such as Clergy Call for Justice and Equality, a Seminary & Mentorship program and Putting Faith into Action, HRC has been working to build a diverse faith-based movement speaking out for LGBT justice.

Faith in America: Faith In America’s mission is to educate the public about the harm caused when misguided religious teaching is used to place a religious and moral stamp of disapproval and inequality on the lives of gay and lesbian Americans, with emphasis on its horrific impact on youth and families. The goal of this education process is to end the advance of religion-based bigotry and the stigma and hostility this uniquely vile form of bigotry promotes toward LGBT individuals and their families.